Home » Costa Rica » You are reading » 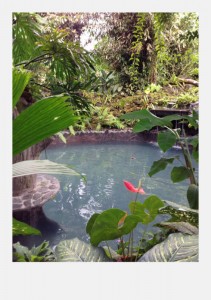 Soaking wet, muddy and full of adrenaline we made our way back to the hotel to try out the hotel’s onsite hot springs. Now these springs were nothing compared to the ones we saw at Baldi the night before, there were only three – two cold and one hot. Regardless it was nice to be able to unwind a bit after our horseback riding adventure. Little Star tried some of the volcanic ash on her face and had a lovely exfoliated glow when she was done.

After that we relaxed a bit, tried some of the local Imperial beer, played some cards and watched the sunset over the volcano before dinner. After consulting with the receptionist and host we took a short taxi ride into La Fortuna where we asked the driver to drop us at the liquor store. Awkward request! At the store we were able to purchase a few bottles of Lizano Salsa

and local rum to take as souvenirs and gifts. We went for dinner at an open air restaurant/bar called Kazan. We were told there would be live music and a lively scene but it was pretty quiet when we arrived. With the busy day and early sunset I think we just arrived too early for the Saturday night party scene. The food here was decent (by this point we were not expecting much.) Little Star ordered the cevice which was good and served in a generous portion and I got… one guess… nachos! We each drank a Mojito became exhausted and headed out. It was very easy to find our way home via the taxi stand. When we got back to our cabin we slowly packed up and passed out.