Home » Croatia » You are reading » 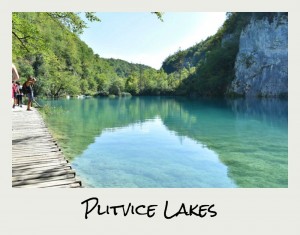 I’ll start out by putting all my cards on the table and say I didn’t really like Plitvice Lakes. Part of the problem was my expectations. Before visiting the lakes I spent months on Pinterest and Instagram looking at photos of Croatia and some of the most beautiful pics were of the Plitvice Lakes. While the lakes are still very pretty in person they are not as pretty as some of the professionally taken and edited photos out on the net.

For those who don’t know the Plitvice Lakes are a series of 16 lakes over 115 square miles located in Croatia. The clear water is beautiful shades of blue and green fed by many natural waterfalls. The Lakes are a UNESCO World Heritage site and at the top of the list of must see attractions in all the tour books. 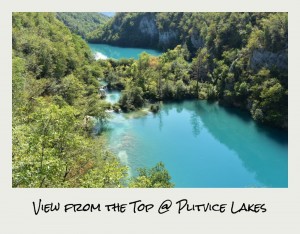 Getting There
The easiest way to get there is by car. The drive is about 2.5-3 hours from Split or 1.5 hours from Zadar. The roads are a bit narrow and winding through the mountains for the first 30 minutes getting away from the coast but once you get past the mountains it is straight and easy freeway driving. There are also bus tours or private tours which will pick you up and take you if renting a car is not an option.

Is it worth it?
We visited the lakes on an afternoon and August and the crowds made the visit almost unbearable. There were so many people on the paths around the lakes it felt like one giant queue from photo spot to photo spot. There was not any place to sit and soak in the beauty. The other disappointment is that swimming is no longer allowed at the lakes. On a hot day with miles of walking all you want to do is jump in and go for a swim.

All of the locals we spoke to recommended a trip to Krka National Park. Krka is only an hours drive from either Split or Zadar and closer to the coast. While no one said not to go to Plitvice it was clear that Krka is the preference for the locals. Krka also has swimming areas and on closer inspection many of the brochures of the Plitvice Lakes which show swimming are actually referring to Krka.