Home » Portugal » Uncategorized » You are reading »

The train ride back to Lisbon from Sintra was relatively uneventful and we appreciated the 45 minutes to rest our weary feet after all the mountain climbing we had done that day. The sun was just setting as we got back to Rossio Square and our hotel was a half mile uphill. As we pondered the best route back we saw one of the city’s many tuk tuk drivers pull up – about to take a break for the evening. We convinced him to take us back to the Chiado neighborhood even though he was just as reluctant to drive his tuk tuk up hill as we were to walk it!

We returned to the Chiado-Barrio Alto neighborhood just as the nightlife was warming up. We stopped in at the famous Café A Brasileira and had a cappuccino and pastel do nata at the counter. I was a bit skeptical after reading reviews that this might be a bit of a tourist trap but like everywhere else in Portugal the coffee and pastries were outstanding! After coffee we watched the street performers for a bit before heading back to wash up. 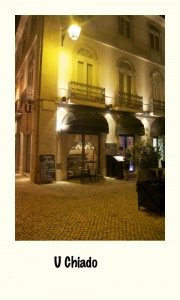 Dinner was at a recommended restaurant called U Chiado. It was a bit strange since it was a Saturday night and there was hardly anyone in the restaurant. Little Star ordered the salted cod which was served over a herbed risotto – salted cod is a very popular dish in Portugal. I ordered a tuna tatake dish which was good but not amazing. The cod on the other hand was excellent. 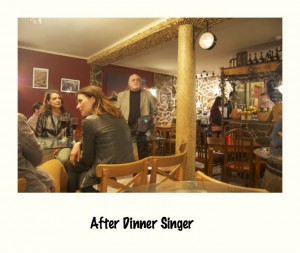 After dinner we wandered into Barrio Alto and found a wine bar with a live singer. The singer was an older gentleman who sang a mix of Portuguese songs to Johnny Cash and Elvis songs. We sampled some port wine, chatted with the locals and then quietly headed off to bed.